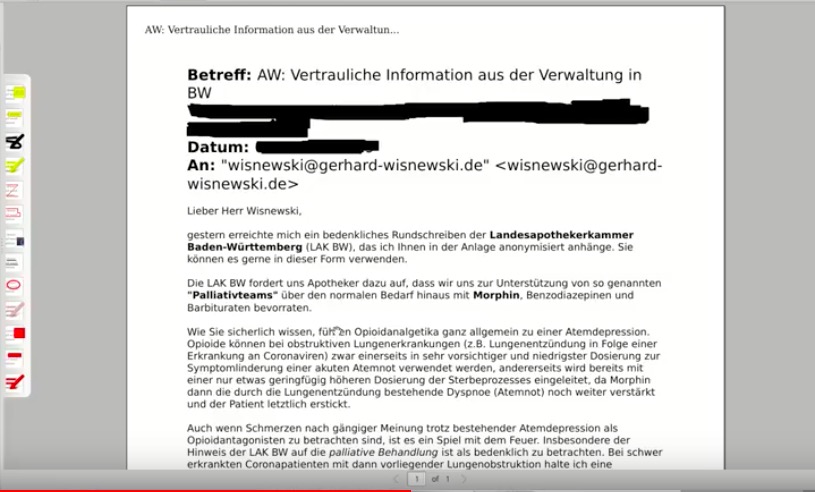 Fortunately, this year the number of respiratory diseases, including Covid- 19, is below average. and Covid- 19 infections in Germany are declining. Nevertheless, a controversial document from the Baden-Württemberg Chamber of Pharmacists suggests that “Corona sufferers” will soon be “palliatively” killed on a large scale. Meanwhile, in Munich the government is sending doctors with police to 3000 “randomly selected” households to test people for Corona Virus.

The following letter was forwarded by a Pharmacist, member of the state Pharmacist association, to German investigative Journalist Gerhard Wisnewski.

Yesterday I received a questionable letter from the regional pharmacy association of Baden-Wiirttemberg (LAK BW), which I send to you in the attachment. It can be used to your convenience in this form.

The State Medical Association of Baden-Wittenberg is instructing us pharmacists to stock up our reserves, above the usual supply, with morphines, benzodiazepines and barbiturates in order to support so-called “Palliative Teems” in the Corona Crisis.”

(Comment Wisnewski: Palliative teems” could be translated in death squads, that are apparently sent out to put people to death who are ill, allegedly with Corona virus, it is active euthanasia.)

“As you know opioid- analgesics generally lead to suppressed breathing function. On the one hand, opioids can be used in obstructive lung diseases, for instance pneumonia, in very moderate doses in order to mitigate acute breathing difficulties. On the other hand: with a slightly higher dose, the process of dying is induced, because morphine will then enforce the dyspnoea caused by the pneumonia, and the patient ultimately suffocates.”

“…. Opioids (morphines), benzodiazepines and barbiturates are the classical means of active euthanasia. Opioids at first induce euphoria and enzo- diazepines as well as barbiturates have a relaxing effect to the point of sleep induction- the perfect palliative cocktail! “