Skripal Poisoning: How PM May Diverts Public Attention Away From Child Sex Abuse

The assumption that British Prime Minister Theresa May has raised the alarm over the Sergei Skripal case to downplay political failures of her cabinet cost Dimitros Lyacos, Greek journalist and foreign affairs columnist, his job. Speaking to Radio Sputnik Lyacos shared his views on what could really be behind London’s hysteria.

Having said on the air that British Prime Minister Theresa May is hyping the scandal about the poisoning of former spy Sergei Skripal and his daughter in Salisbury to divert public attention away from the Rotherham child sexual exploitation case and Brexit problems, Dimitros Lyacos, a foreign affairs columnist, was fired from Cyprus’ state-owned television channel.

“I dared to say on the air in Cyprus, the former British colony, that the reason behind British PM Theresa May’s brining up [the Skripal case] is — at least according to Moscow — the Brexit problem which she has yet to solve. In a year Britain should withdraw from the EU and pay a huge sum of money to Brussels. And the second reason is a scandal about the rape of more than a thousand underage girls in a [South Yorkshire] provincial town,” Lyacos told Radio Sputnik.

The journalist specified that the rape incidents remain neglected due to the fact that some of perpetrators were “refugees” which makes the case highly sensitive for the British authorities.

It was previously reported that over 1,500 children had fallen victim to sex abuse on an unprecedented scale in the South Yorkshire town of Rotherham between 1997 and 2013. According to the 2014 independent inquiry into the child sexual exploitation in the town, the majority of abusers were individuals of “Asian” origin which prompted fears among local officials to be labeled as “racists” while tackling the problem.

“On Friday morning my colleague from London went on air and began to praise May, who made a general statement [on the Skripal case] along with [German Chancellor Angela] Merkel, [US President Donald] Trump and [President of France Emmanuel] Macron. And then they [Cyprus state-owned broadcaster] addressed me: “Dimitros, good afternoon. What’s going on in Moscow?” And I began to tell them [about May’s attempt to divert Britons’ attention away from domestic problems.]. While speaking to them I felt that they were about to say ‘All right, Dimitros, good-bye!'”A week later, Lyacos was replaced with another correspondent to cover the 2018 Russian presidential election. The journalist sent an official letter to the editorial office asking his colleagues to explain the situation, but received no response. At the same time, he believes that the editorial board ceased cooperation with him against its will.

“If I were a British ambassador in Cyprus and heard this report, I would react like this: ‘Who allowed him to say such things?’ Then you can speculate about what could happen. The only thing is that this is not an initiative of my colleagues and my direct supervisors,” the journalist said. 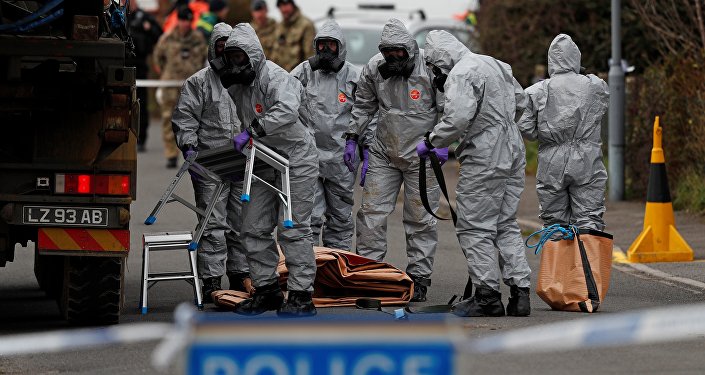 On March 4, the police found former spook Sergei Skripal, 66, and his daughter Yulia, 33, unconscious near a shopping center in Salisbury, Wiltshire, England. The Skripals were reportedly poisoned by nerve agent А-234.Sergei Skripal, a former MI6 agent, has been living in Britain since 2010 when he and three other individuals were pardoned by the Kremlin and swapped with 10 Russian intelligence agents, exposed in the US at the time.

Although the inquiry into the poisoning of the former spy has yet to be completed, British Prime PM May groundlessly claimed that it was Moscow who was responsible for the attempted murder of the Skripals. She severed top-level diplomatic ties with Moscow and authorized the expulsion of 23 Russian envoys from the UK which prompted a similar move on the part of Moscow.

Commenting on the British hysteria around the Skripal case, British journalist Rod Liddle dubbed London’s response to the nerve gas attack as “an act of self-harm” in his recent op-ed for Spectator.

“Our response to the Salisbury nerve gas attack has been precipitous, shrill, petulant and an act of self-harm,” Liddle wrote on March 24. “And already our European allies are — rightly — beginning to row back a little from their original stance of unequivocal support for the UK and refusing to attribute the attack directly to the Kremlin. That’s because they don’t know it is attributable to the Kremlin, and frankly nor do we at this stage.”

“Why not, you know, wait a little? Gather a bit more evidence?” the British journalist asked rhetorically.

Meanwhile, 14 EU member states and the US have signaled their willingness to expel Russian diplomats “in solidarity with the UK.”

“Fourteen out of 28 EU member-states have decided to expel diplomats from the Russian Federation as a measure of solidarity with London on the Skripal case,” European Council President Donald Tusk told journalists Monday.

The views and opinions expressed by Dimitros Lyacos are those of the speaker and do not necessarily reflect those of Sputnik.