America’s most senior COVID-19 expert has defended people’s right not to get a COVID-19 shot after being asked why vaccination passports are not mandatory.

Cuomo asked him: ‘If you’re not vaccinated…you will cheat..

‘And the fix here is something that’s been studiously avoided by the (Biden) administration, and I don’t know why, except for just basic politics

‘Why do they avoid the passport?’

Fauci, who also serves as the Director of the National Institute for Allergy and Infectious Diseases, said: ‘I don’t have the answer… It’s a complex reason. And one of them is that if you…require a passport, you’re going to be discriminating against people and putting people at a disadvantage of essentially forcing them in many respects to get vaccinated.’ 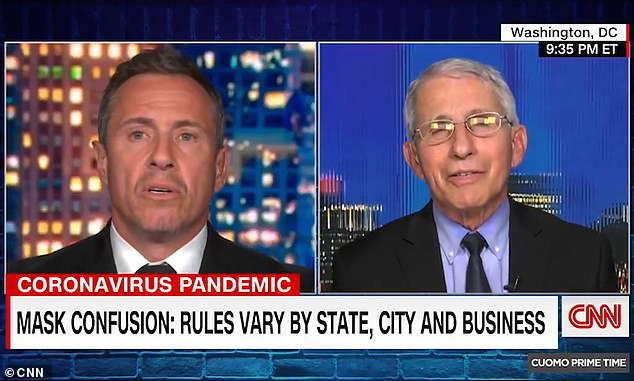 Cuomo countered by asking Fauci why people who choose not to get vaccinated should get ‘opportunities’ – such as removing face masks and ignoring social distancing rules – recently afforded to people who have been vaccinated.

Passports would see vaccinated people present electronic proof of their inoculation, such as a QR code, which could be scanned with a reader.

They have been heralded as a way of getting crowds of people safely back into bars, cinemas, nightclubs, and as a means of helping end ongoing international travel bans.

‘What the administration is saying is that they’re not going to mandate a passport for vaccines centrally,’ Fauci said. He also noted that some organizations – such as some colleges – are already requiring proof of vaccination.

But Cuomo pressed again, questioning why the federal government should leave it to organizations to decide when they have the resources to roll out a vaccine passport program. President Biden has previously said he has no plans to try and impose a federal vaccine passport mandate over privacy concerns.

Fauci said some states and private organizations planned to bring them in, including many US colleges, who say they won’t let students on campus this fall without one.

But addressing the wider question of a federal vaccine passport, Fauci continued: ‘Chris – I don’t have the answer for you.’

Fauci added: ‘You could make a good argument for that, Chris, I’m not arguing with you. But the policy is – they don’t want to do it centrally.

It sees fully vaccinated people download a phone app, which allows them to enter personal details and obtain a scannable QR code that serves as a passport.

The Excelsior Pass will be used to let fully-vaccinated people into sports fixtures where they can sit close to others, and the passes could also be used by bars, theaters as well as nightclubs in the coming months.

Cuomo previously hailed his brother’s efforts to tackle COVID in the early days of the crisis – and repeatedly interviewed him on the show.

Fauci backed Joe Biden’s refusal to come up with a federal vaccine passport such as the Excelsior Pass, pictured, currently available to residents of New York state

But CNN bosses have since banned their star from doing so after Governor Cuomo was accused of covering up nursing home deaths, and being a prolific sex pest.

The Governor denies those claims.

Centers for Disease Control guidance says fully vaccinated people no longer have to wear masks in any setting, although some states have continued to impose rules, regardless of whether people have been vaccinated or not.

Interviewing Dr Fauci, Chris Cuomo said for him, the answer on mask guidance should be simple.

‘If you’re vaccinated you don’t have to wear a mask,’ Cuomo said. ‘If you’re not vaccinated, nothing has changed, but you will cheat.’