A mantle plume producing almost as much heat as Yellowstone supervolcano appears to be melting part of West Antarctica from beneath.

Researchers at NASA have discovered a huge upwelling of hot rock under Marie Byrd Land, which lies between the Ross Ice Shelf and the Ross Sea, is creating vast lakes and rivers under the ice sheet. The presence of a huge mantle plume could explain why the region is so unstable today, and why it collapsed so quickly at the end of the last Ice Age, 11,000 years ago. 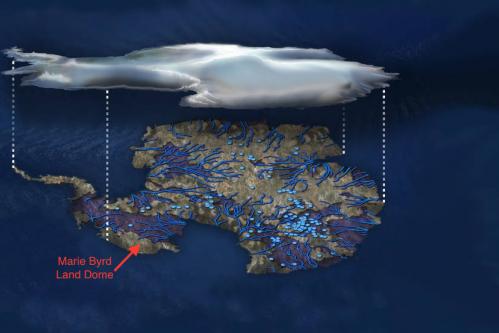 Comment AEC: I have been talking about increasing volcanic activity in correlation to the decline in the Solar Magnetic Field strength on this site.  See also my article Climate Changes Explained; paragraph: The history of the climate change agenda: From Global Cooling to Global Warming to climate change to climate chaos.

Mantle plumes are thought to be part of the plumbing systems that brings hot material up from Earth’s interior. Once it gets through the mantle, it spreads out under the crust, providing magma for volcanic eruptions. The area above a plume is known as a hotspot.
For 30 years, scientists have suggested that a mantle plume may exist under Marie Byrd Land. Its presence would explain the regional volcanic activity seen in the area, as well as a dome feature that exists there. However, there was no evidence to support this idea.

Now, scientists from NASA’s Jet Propulsion Laboratory have created advanced numerical models to show how much heat would need to exist beneath the ice to account for their observations—including the dome and the giant subsurface rivers and lakes we know are present on Antarctica’s bedrock. As lakes fill and drain, the ice thousands of feet above rises and falls, sometimes by as much as 20 feet.

Study author Hélène Seroussi, from JPL, said when she first heard that a mantle plume might be heating Marie Byrd Land she thought the idea was “crazy.”

“I didn’t see how we could have that amount of heat and still have ice on top of it,” she said in a statement.

However, in a study published in the Journal of Geophysical Research: Solid Earth, Seroussi and colleagues looked at one of the most well studied magma plumes on Earth—the Yellowstone hotspot. The team developed a mantle plume model to look at how much geothermal heat would be needed to explain what is seen at Marie Byrd Land. They then used the Ice Sheet System Model (ISSM), which shows the physics of ice sheets, to look at the natural sources of heating and heat transport.

This model enabled researchers to place “powerful constraint” on how much melt rate was allowable, meaning they could test out different scenarios of how much heat was being produced deep beneath the ice.

Scientists also found one area where the heat flow must be at least 150-180 milliwatts per square meter—but data suggests mantle heat at this location comes from a rift—a fracture in the Earth’s crust where heat can rise up.