Remember, things could be so much worse right now: Magdalene Floods 1342-43 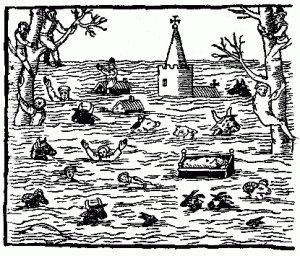 678 years ago to the day, a natural disaster swept over Central Europe the likes of which we have not seen since. The Magdalene Floods, beginning on June 19, 1342 destroyed the landscape of Germany and agriculture as they knew it. This ushered in a series of natural disasters that were to culminate in the Black Death in 1348-1351, which was later  claimed to be caused only by a pathogen. The droughts, floods, earthquakes and other natural disasters between 1315 and 1351 killed up to 70% of the population of Eurasia.

There were many extreme floods in these two years in Europe and beyond, mostly from rainfall, but even from “sea surges”. The main event during the week from July 19th, 1342 and onwards, was the biggest flood disaster in Central Europe of at least the last millennium and possibly of the entire Holocene. It devastated primarily German farmland and towns. The actual Magdalene Flood left its main impact on July 19- 25 , 1342, but it took months for the rivers’ high water levels to subside. The name was derived from Saint Mary Magdalene Day, which is held on July 25. The water masses, carrying erosion material, changed the demographics and scarred the topography of Germany permanently.

Residues of this flood are recorded in the freeze core sediments of the Schalkenmeerener Maar. (89) 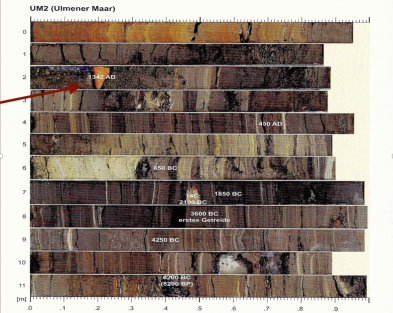 Sediment core of the Ulmener Maar showing a distinct orange-red layer of unknown consistency in the flood year of 1342, the composition of the material has not been investigated. Image Sirocko, Frank; Wetter, Klima und Menschheitsgeschichte, 2010; Darmstadtp.42

In this Maar, a steep lake, the flood is marked as a distinct deposition of orange/ red sediment layer that is unique for the last two millennia. (See page. 43)

Kiss, A;; et al, 2015, studied in details the numerous flooding events of the two years question, of which the German 1342 was the one that left the biggest impact.

The floods in these years, caused by excessive rainfall, attracted great attention: causes and consequences, such as soil erosion and short-term impacts on society, were discussed in a number of studies, for instance in the following paper by the Austrian Technological University: “In our presentation, we would like to draw the attention to the extraordinary character of the entire year of 1342, and also of 1343 with providing an overview of the flood and sea surge events and flood waves that occurred during these two extraordinary years in Europe. In many parts of Europe, not only 1342, but also the year of 1343, it was rather humid and wet with a great number of flood events: in these two years, floods were reported from northern Greece through North-Italy, the Carpathian Basin (almost in every season) to the south German territories. 1342 and 1343 were rich in floods even in some of those areas where the July 1342 event could not be detected. The results of this first comprehensive European overview show that at least 3 (but maybe even 4) flood waves occurred which were of millennial level, and repeated extreme floods occurred especially in Central Europe, but parts of West-Europe as well as the North- Mediterranean were also badly hit by extreme floods or sea surges in these two years.” 90

Now let’s look at some details of the July 1342 flood in Germany, the main event. Eco-system researcher Hans-Rudolf Bork of the University of Kiel, is one of the leading authorities on this subject:
„In July 1342, many rivers (in Germany) were at their highest water level of the last millennium, possibly of the entire Holocene.” 91

To put the volumes of water into perspective:

The following paragraph is a summery of the most striking details which I translated from an article in Zeit online, June 17 , 2013, by the title of ‘Deutschlands Jahrtausendflut’ (‘Germany’s Flood of the Millennium’).

“The year 1342 began with extraordinary cold and heavy snowfalls in Germany, followed by sudden warming in February, the snow melt water tore down walls and in Prague, the Moldau River tore away the Judith- bridge – the predecessor of today’s Carls- bridge. Then snow and frost returned, to be then replaced by a very wet spring. Several local floods had plagued the population of Southern Germany, Switzerland and Austria before the main event. The torrential rains started on July 19 . The harvest had not been brought in. In the end, not only was most of

the crop harvest destroyed, but villages lost up to half of their farmland due to soil erosion. Meaning, on half of the fields, there was no fertile top soil left for planting in the following years. The before mentioned Hans-Rudolf Bork of the University of Kiel, who conducted intensive studies on the 1342 floods, stated that “the volumes of water were enormous: They were 50 to 100 times higher than during the flooding of the Oder in 1997 or the Elbe in 2002 and 2013.” Eye witness accounts claim that:

“In this Summer, there was a great inundation of the waters throughout our zone, this was not caused by rainfall but it seemed that the waters gushed out from everywhere, even out of the peaks of mountains (…) and over the walls of the city of Cologne they traversed with boats. (…) the rivers Danube, Rheine, and Main carried away towers, very strong city walls, bridges, houses and the fortification walls of the city. And the portals of heavens were opened, and rain fell onto Earth like in the 600th year of Noah (…) it happened in Wurzburg, that the river Main crushed the bridge with its might and forced many to leave their homes”. (Curt Weikinn)

The destruction of this bridge is also confirmed in the “Chronicles of the city of Wurzburg”.
In some cities, water levels were up to 10 meters above normal. Churches were inundated up to the roof.
“[…] alongside all great rivers of Europe and the small tributaries, the Inundation destroyed towns, people, trees, fields and meadows completely, and carried all to the lower parts of the stream.” (Johannes von Viktring).
Traversing over the city walls of Cologne in a boat? That used to appear to the historians of the last centuries as a gros exaggeration, to say the least. But the archeological and geological data suggests that this was indeed possible.
To make matters worse, land mismanagement had contributed to the extreme devastation of soil erosion, forests had previously been cut down for agricultural land clearing and wood use. This had gone along with the enormous population growth in the Medieval Climate optimum. At the height of this warm period, forests were reduced to about 10 to 15 % of the total land surface of Germany, today forests again cover over 30 % of the land. This weakened soil was carried away more easily, but this was only a secondary factor, considering the never again reached catastrophe.
The water damage to the soil was almost incomprehensible, vast amounts of agricultural soil was washed away, an estimated 13 billion tons of top soil were lost in a few days. More than is usually eroded away in one millennium. Bork:

“One third of the entire soil erosion of the last 1500 years took place in this weak. Many villages lost more than half of their agricultural land.”

As survivors took refuge in elevated areas, in many cases farmers did not return, farmland was abandoned permanently and reclaimed by forests until today.
The scars of the enormous flood water streams are visible even today. In the middle of forests, small canyons of up to 14 meters deep were carved out and in many instances, their fragile, water saturated sidewalls collapsed, this devastated many hill slopes. These gorges can also be seen in the northern foothills of the Alps – downhill canyons where no creek runs on the bottom today and where vegetation is very scares. Bork:

“These effects will be visible for a long time. Many of the locations, especially in the lower and middle altitudes are no longer usable for agriculture to this day. It will take until the next glaciation period in which loess minerals are deposited, and then in the following warm period, new soil will be generated. Only then, these terrains can be used for agriculture again – that will be in about 10,000 years.”

According to Frank Sirocko, it had already been raining excessively as early as the first week of June, before June 19 . It had been raining “throughout the entire region uninterruptedly from July 2 to 7 of 1342, “50% of the average annual rainfall fell in this week alone.”

The Netherlands were apparently devastated less directly by the water masses, i.e. not by rainfall, but from the German rivers and strangely also from sea surges at the same time. 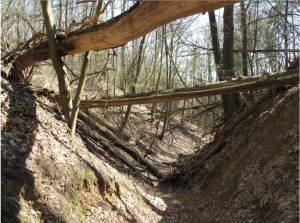 Washed-out channels (German ‘Runsen’) are left from the floods all over the foothills of the Alps, the terrain has not recovered or filled in to this day.

It took a few days for the water masses to affect the Netherlands by the high water along the rivers, and on the 25th of July many river dikes broke.

In Venice, strangely on the same day, on Feb 25th 1342, a severe storm and extreme flood are recorded in the Cronana A Latina, but narrated very briefly: “the water rose so ferociously in Venice, it says, that no living person had seen water so high.”

I say strangely, because in Venice, the high water cannot be from rainfall, since the city is in a lagoon and directly connected to the open sea. The known inundations in the Lagoon (aqua alta) are caused either by high tides in the persistent southerly winds (the sirocco) pushing up the Adriatic Sea or by storms, or both.
This storm was further brought into connection with the story of a ‘miracle’ of 1342 in Venice: “human action that unleashes demonic destructive anger; the saint who takes a boat to ward off the danger; and the delayed exposure of the peril.(…)” 94

The Magdalene Flood and the Black Death.

It took weeks for the water levels to recede to their normal states. The direct death toll of the flood is estimated to be in the tens of thousands. But the aftermath was even more disastrous. In many regions, agriculture was now impossible. Crop loss and famine followed, the population was further weakened. A few academics were as bold as to suggest that the Magdalene Floods might have ‘contributed’ to the Black Death. Eveline Zbinden of the University of Bern hinted to this possible connection in her detailed summery of the floods. But if we consider the severity of the combined calamities, the question should rather be: how could these events not be related. Keep in mind that after half of the farmland was gone, there followed the “four years without summer” 95 before the outbreak of the plague in 1348 and throughout the 1340s, a never again reached series of earthquakes, especially in Italy. Again, whatever caused the final pandemic, it seems to have been rather the last blow of many and could have come even without a particular contagious disease.